What can be more exciting around Halloween than zombies? Zombies are a big draw in recent years with TV series like AMC’s “The

Walking Dead”, and several big budget films that feature the undead. With that thought in mind, now think back to the days of your youth when we all would stay up late to watch “Up All Night” on the USA Network. We stayed up late because we knew those B-movies were cheesy, and although edited of all the gore and skin, we movies our parents didn’t want us watching. What we tend to forget however, was the fact there were some really crappy movies shown during that segment. I believe that I have uncovered the daddy of them all as it relates to awful B-movies, Raiders of the Living Dead. I thought that might be something related to Halloween in the 85 minutes of film, but I was proven wrong yet again. So, if you are brave enough to search for this movie in your video stream, I suggest that you put it on fast forward and just read through the highlights from the movie we’ve provided. Trust me, you’ll get more for the highlights than you would from the film anyway.

Tagline: They hunt down Zombies who feed on Human meals.

As the film begins, a terrorist hijacks a tank truck and takes it, the driver, and some casual hostages into a chemical plant, where he is overpowered and killed by a tough black cop with a bit of a strut. Why do I mention this? I don’t know as it has nothing, and I mean nothing to do with the rest of the film. A newspaper reporter follows a story out to an old correctional institute where he believes something unnatural is going on. After he is chased from the facility by something scary, he is bound and determined to get to the bottom of what he saw. Not worried one bit that the lady he went out there with is now a zombie snack. After being picked up on the road by a “concerned citizen”, Morgan the reporter, develops a crush for his savior and together they go out and laugh uncontrollably at a Three Stooges movie.(At this point, you might be starting to wonder, what is the point of this movie? Trust me, I watched the whole thing and still don’t know.)

Enter Jonathan, a budding Einstein who likes to take apart old electronics and accidentally make a laser gun out of it. After a series of choppy events, Morgan ends up boarding up for the night at the home of Jonathan and his grandfather, who tells them both of his suspicions about the zombies. To make a long, drawn out, boring story short, after learning that a doctor was bringing corpses back to life via his experiments (for not explained reasons) Morgan, grandfather, and Jonathan return to the island of zombies and clean house. Oh yes, all with the help of Jonathan’s supped up laser gun.

What you Would be Missing:

“You look like a guy who has a pretty interesting story if a person wanted to pry.”

“I know it sounds crazy, but I think someone has found a way to bring dead bodies back to life.”

Let me sum up this film quickly and painlessly – TOTAL SHITE! I realize that there wasn’t much of a budget to make the film, but come on. This one is really BAD. The script seemed as though is was made up on the fly as they were filming as there were many, many continuity issues, bad editing,  and plot holes. The acting was nothing short of atrocious as well as the dialogue. But the absolute worst part of the film in my opinion was the very awkward and undeniably horrible soundtrack. The film was filled with bad 80’s TV drama music that didn’t match the film at all. And what made it worse was that there were several scenes of no dialogue (even though things were going on) and it was filled with this crappy music. Ugh… Without question, this film gets the ultimate 5 out of 5 turds.

With Halloween coming just around the corner, I wanted to get my fill of monster movies in to prepare myself for all the upcoming tricks and treats. My first movie of the Halloween season was monster filled classic, Troll. Having already seen Troll 2 earlier this year, I was very curious as to how the “worst franchise in movie history” began. And how could I go wrong with this cast? Sonny Bono, Elaine from Seinfeld, Timmy’s mom from Lassie, Atreayu from NeverEnding Story, and some Carol Anne from Poltergeist look alike. So, I ventured forth and set aside 82 minutes to devote to the viewing of this Halloween must see. If you would rather spend your time having a seizure to the song “Summertime Blues” then I have left you with some quick notes over the film so that you don’t miss a thing.

Tagline: Apartment for Rent. Inquire Within…

Torak, a troll fairy (I know kind of a weird combination huh?) sets out to recreate a fairy universe from centuries past in hopes that it will lead to his ruling of the human world. He accomplishes this by kidnapping adorable little Wendy Anne and shapeshifting into her body, and posing as her throughout their new apartment complex. Torak-turned-Wendy Anne finds her way into the apartments of the buildings tenants only to appear as the troll, and with the help of a magical green ring, turn the tenants into a fern garden that sprouts more little trolls. Harry Potter Jr. (yep, that’s right) suspects that his sister is not quite what she seems to be and after meeting with an old fairy princess from the floor above, Harry is determined to save his sister and foil Torak’s plans.

What you would be Missing:

“Have you been playing with dead cats?”

“I’m in to swinging and children having pillow fights at all hours of  the night while I’m trying to score might cause me a few strikeouts.”

“You can forget the milk honey, he’s in to gin and tonics.”

“Buzz off you little creeps.”

“Someone probably had their stereo on too loud. Probably one of those kids.” – Good rule of thumb, if in doubt, blame the kids!

Just to be clear, Troll 2, the notoriously so-bad-it’s-hilarious sequel has absolutely no connection to this movie at all. In fact the trolls are referred to as goblins. Nevertheless, this movie is pretty cheesy and the acting isn’t all that great, but there are some enjoyable parts. This would be the perfect scary movie for the 8-10 year old crowd. But if you are looking for some sort of blood and gore slash-fest or a scream flick for your All Hallows Eve get together, this one isn’t for you. I can’t quite give this the dreaded 4 or 5 turds, the mark of reel crap, and I can’t really say that it was all that good either. So, I’ll stick with somewhere in the middle on this one. The 1985 version of Troll gets 3 turds from me. On the good side, I have seen rumors that there is a remake coming on the horizon in the near future. 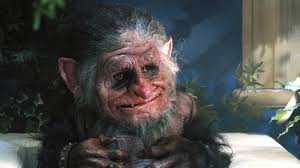 Introducing: Warrior of the Lost World (1985)

Looking for a movie with some action, some things blowing up, and a clinic on how to spray bullets without hurting or killing anyone. Well, I’ve got one for you. I just finished watching 1985’s Mad Max ripoff, Warrior of the Lost World. This post-apocalyptic tale will have you wondering how to cut the annoying voice of a talking motorcycle while still keeping all it’s cool features. So, if you are curious but just want to put the movie on fast forward, I’ll provide the highlights for you so that you don’t miss anything important.

Directed by: David Worth

Tagline: Only one rider can destroy the Omega force.

Stunt Dummy Appearances: 3 (Can you find them all?)

While on the run from treacherous Omega troopers and post-apocalyptic punk rockers, a mercenary (only known as The Rider) and his hyped-up, talking motorcycle named Einstein crashes his way into a lost world where he is deemed “The Chosen One” to rescue their leader who is being held captive and up for death by the evil, Prossor. With the help the leader’s daughter, Natashia, our hero sets off to rescue the good Doctor. In the process of staging a somewhat successful escape from the Omega headquarters, Natashia is trapped and brainwashed into becoming a servant to Prossor, while her father and The Rider flee the area. The two then enlist the help of a rogue’s gallery of misfits to help rebel against the Omega regime and make an attempt to save the vivacious Natashia.

“Work is everyone’s freedom. Work must be neat and efficient. Food and entertainment are provided. Silence is its own reward. Obey the laws and obligations. We are very well today.”

“Prepare her for the assembly line.”

After watching this movie, I couldn’t decide what it was that I liked most about it. I could recall a lot of things I hated – the soundtrack, the talking motorcycle, the cheesy acting, the stupid hand-to-hand combat sequences) but then it hit me…ahhh, the explosions! This movie had some of the most over the top vehicle explosions I think I’ve ever seen before. It’s almost as if every vehicle was a hydrogen bomb on wheels. And oh yes, I also liked Donald Pleasence as Prossor, but only because I couldn’t get the image of Dr. Evil out of my head the whole time. And the chase scenes weren’t all that bad either.  As far as the rest of the movie goes? Meh. Not much story and a lot of plot holes. If it wasn’t for the most annoying character, Einstein the motorcycle, I would have probably liked it better. CRAP!! CRAP!! CRAP!! So with that said, I am giving this movie 3 turds out of 5 because it did have some redeeming qualities and wasn’t a total waste of time. 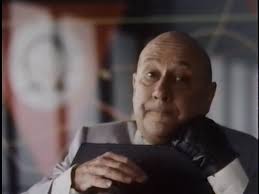