Spaceships crashing from space inhabited by aliens who escape and feed off of the beings on Earth! Yes please! Sounds like a fun premise for a science fiction flick. At least those were my initial thoughts, before actually seeing this movie. I wasn’t expecting anything great, and I was not disappointed or lead astray. Your best bet as you load up this sci-fi/horror movie would be to refer to the notes below, as I’ve hit on the most important parts of that you won’t want to miss.

Starring: Dennis Christopher, Lynn-Holly Johnson, J.O. Bosso (curious as to what the J.O. might stand for)

Tagline: Mankind’s Deadliest Threat has come from the Skies.

Number of Hamburger heads: 5 plus a cow

Synopsis: When U.S. “Skylab” comes crashing down from outer space and in doing so released alien microbes in the air and into the community of Durade, Spain. Three American teenagers who are looking for a fun trip find themselves stuck in Durade when their RV breaks down and they are left to find parts for repairs. While in town, they begin to notice peculiar behaviors from the local citizens and upon meeting a NASA scientist find out the truth about the Skylab crash. The three young people and the scientist search for the antidote to keep everyone from dying from the alien creatures who are feeding and incubating inside them.

Things you’ll want to make sure you don’t miss:

“I couldn’t bare the thought of leaving a hurt dog in the middle of the highway.”

“Golly gee whiz and check it out dudes, Brooklyn Dodgers, and all that stuff…”

“Did you two know that one out of every eight people are infected with Elmer Fudd disease.”

This movie is not good, not good at all. The acting was pretty cheesy as it is with the typical 80’s horror flick. The film did feature some surprisingly gruesome gore and blood. The plot was pretty lame and stupid. This movie also goes by a few other titles which made it hard to find. The film is most commonly known as Alien Predator or Mutant 2.

While watching, I found that it was difficult for me to understand what exactly the real threat was. Was it the alien, was it the weird citizens, the vehicles that ran people over, was it a supernatural entity that would make things appear, disappear, and move. I never really understood what the true threat was. By the end of the movie, the alien takes center stage. It only took 85 minutes to show itself in the 90 minute film. Starting from the beginning with some Psycho horror movie style music to a  jazzy synth mix during a car chase, the soundtrack is bad. The acting was nothing to write home about while at the same time not terrible. Damon’s character was probably the best acted while the role of Sam was rather annoying, although there was something hot about watching her run through the streets in tight jeans and boots. All in all, this movie earns itself 3.5 turds out five. 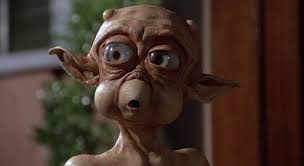 spree and string of thefts and not taken into custody? No? Well be lucky that I watched this one for you so that you can spend the 95 minutes instead doing something much more enjoyable like picking up poop in the backyard before mowing.

Tagline: Why won’t they tell us?

After launching a satellite into space and watching it explode in front of their eyes, astronauts Steve Bancroft and Lew Price are blamed for the explosion and the death of their fellow crew mate. However, the crash happened as a result of colliding with an alien spacecraft which then crashes on Earth in the Arizona desert.  Darren McGavin leads a team of NASA scientists given the task of investigating the crashed spacecraft which is found to contain three dead alien life forms. Through research and old manuscripts the scientists believe that these aliens are from a race of ancient astronauts thought to have visited Earth long ago and are responsible for the creation of all mankind. A government cover-up due to an impending election and two astronauts traveling through Arizona and Texas to clear their name give you the premise of Hangar 18.

“Either we’re imagining this whole thing, or the blip of the UFO has been erased.”

“They sure didn’t get these equipment at Radio Shack.”

“We, mankind, the human race, are their children.”

Despite all of it’s faults and plot holes, this movie wasn’t on the surface as bad as I had anticipated. It wasn’t great by any means, but I’m betting this one is on the shelf of some sci-fi collectors as a classic. Won’t be on mine in a million years but hey, to each their own.

Since it did have some merit to it, albeit very little, this film only deserves two turds out of five.

Anyone in the mood for a comedic, sci-fi, horror flick that is apparently funded partly

by Heineken beer? Nah, I wouldn’t be either, but I watched it so you wouldn’t have to waste 85 minutes of your life.

Taglines: People of Earth, your planet is about to be destroyed… We’re terribly sorry for the inconvenience.

The new satellite dish of the Putterman family has picked up some garbage from another galaxy that has been converted into energy and zapped among the planets. This intergalactic energy takes the form of an alien that looks like Jabba the Hutt had sex with Seymour the man eating plant. The only one of the Putterman’s that recognizes the danger of the alien is Sherman, the youngest member of the family, and goes to great lengths to warn them of the impending danger. Unfortunately, Sherman’s parents are too interested in swinging with another couple to take any notice. The alien materializes out of the television to chow down on members in and around the house. Sherman’s sister, Suzy, and her metal head boyfriend, O.D., try to domesticate the alien; but with any household animal, they tend to be very temperamental and the slightest thing will set them off.

“Remember kids, you do your thing; we’ll do ours.”

Something tells me that this movie is probably meant to be seen while smoking a joint and speed drinking a case of liquor, which would explain all the stupid attempts at stupid humor. Since I don’t smoke weed and I was all out of beer, I did have to suffer through this atrocious film, so you wouldn’t have to.

I would give this movie 4.5 turds out of 5! This movie ranks in at a whopping 0% on Rotten Tomatoes. Holy Tomatoes is right! Very bad movie, but I’m guessing there are worse out there.