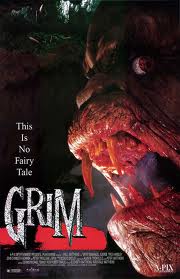 Who doesn’t like a good monster movie every once in a while. It had been a while since I sat  down to a monster flick  that wasn’t a traditional zombie or ghost. While searching through the steaming library of Netflix, I ran upon a film what had the most interesting looking monster as it’s cover art. I noticed that it had a one star rating on Netflix and when searching for it in Rotten Tomatoes, it didn’t even have a rating from critics and only a 10% audience rating. With rating like those, that makes for an awful monster movie. So, I thought what the heck,what have I got to lose.

Tagline: This ain’t no fairytale

A group of spelunkers visit an old abandoned underground mine to see why there are cracks in the foundations of area homes. During their investigations of the mines, the visitors come in contact with a gigantic monster that seems to have been conjured up by a couple of the visitors during a seance at their home. The monster plays with and feeds on unsuspecting humans and keeps them locked up in cages. The monster has the ability to possess the minds of those that come in contact with it and has the uncanny propensity of walking through walls. One of the adventurers, Steve, mysteriously had a medallion that supposedly hurts the monster and he offers up his girlfriend as a sacrifice to the monster, known as Grim. During the attemptedsacrifice, the two “experts” of the group, find a way to destroy Grim by using light. This knowledge leads them to a plan that will hopefully stop the monster and get themselves out of the catacombs alive.

What you won’t want to miss:

Comments from people at IMDB and Rotten Tomatoes have crapped all over his film and going so far as to say that Grim is one of the worst movies ever made. This movie does indeed have it’s faults, but I don’t know that I would go quite that far, have any of these people not seen Mutant Hunt or Birdemic for that matter. Now, don’t get me wrong, this movie is nowhere near good. The acting is pretty bad and the soundtrack is just atrocious. The monster is somewhat interesting looking and the design probably would have been put to better use in another plot. And speaking of the plot, well, there wasn’t much of one. The story had several plot holes that were very distracting and disjointed. Where did the monster come from? Why does it choose to attack certain people? I could go in to more detail, but why should I, the movie itself didn’t. I’m giving this movie 4 turds, but only because it’s lucky that I’ve seen worse movies than Grim. 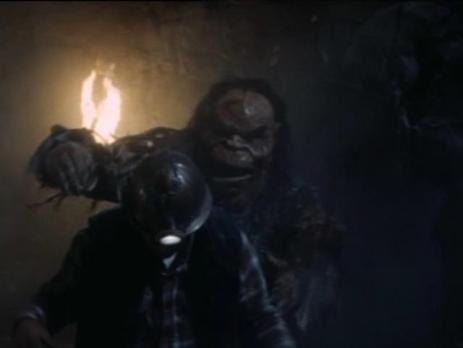 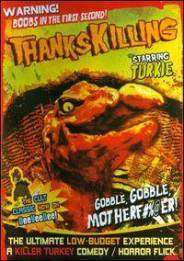 Thanksgiving is rapidly approaching and the time for stuffing oneself to the point of being immobile is upon us. It’s tradition in many homes to watch football after the Thanksgiving dinner, while some families like to hit the movie theaters to check out the new Hollywood holiday blockbusters. I say, forget all that, why not sit back and watch a movie in the luxury of your own living room? It’s comfortable, you don’t have to pay an arm and a leg for it, the 3D glasses won’t give you a headache, and you can get up to pee anytime without missing any of the movie. Thanksgiving themed movies are very few and far between, especially cheesy ones. I have however found one that might be what you need to take your mind off of the busy holiday and might be just what you need before attacking the crowds at the Black Friday sales! This by the way is NOT a family film!

Number of F-Bombs from a turkey: 7

An ancient Indian shaman puts a curse on a turkey, named Turkie,  to get revenge on the pilgrims for taking their land. Years later, after being awoken by dog piss, the turkey emerges once again to kill poor anything in it’s path. Enter our characters, five college students on their way home for Thanksgiving break. Their vehicle stalls on the side of the road and the students have to camp out overnight where they are spotted by the turkey. The murderous fowl tracks the students, kills their families, and aims to kill each one of them one by one.

What you should look for:

“Pull your shirt down, it’s Thanksgiving; not Tits-giving.”

“I’m thankful that your mom has the juiciest poon in town.”

“Oh please Ally, your legs are harder to shut than the Jon Bonet Ramsey case.” Said twice just in case you didn’t get it the first time. And the characters laugh and react to it as if they never heard it.

“My dad has a huge collection of books, I’m sure he has something on killer turkeys.”

“It’s not your fault, there are just somethings in life we can’t control. And unfortunately this isn’t like a football game that we can just call an audible at any time.”

“Don’t be silly, that kind of stuff only happens in movies.”

“Do I smell sequel?”

Okay, okay…I realize that the whole point of the movie was to be as cheesy as possible. And that they filmmakers’ intentions were not to take the film too seriously. It was meant to be a bad movie. I get that. Knowing that, made this film a lot more enjoyable to watch. The filmmakers were able to make this movie on a budget of $3500, which I must say was pretty damn impressive. I thought the title sequence was great! Now the acting left a little to be desired, but I’m sure that the acting was meant to be done badly as well. On the film’s official website the producers tell you to “take the movie with a grain of salt”. How can you not while watching this? With that said and knowing the tongue-in-cheek intentions of the film, I rather liked it. There were parts that made me laugh at the sheer absurdity of it all. Because this film doesn’t take itself too seriously and that it is the holiday season, I can only give this movie 1 turkey turds out of 5.

There are two sequels to this film as well. Neither of them are streaming online as of yet. 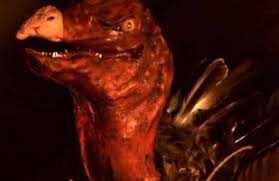 Have a Happy Thanksgiving!!

Remember those movies from your childhood that you remember by one or more distinct images. You remember the images but don’t

remember actually watching the movie. Such is the case with Ghoulies. The image of the Ghoulie coming out of the toilet will forever be one that I can harkon back to my childhood and scaring my cousin, telling her that we had Ghoulies in our backpacks. With those visions in my head that I watch this movie of the 80’s that tried to piggyback on the fame of Gremlins. It didn’t work.

If you feel the need to watch this B-movie classic, then I have provided you with the Cliff Notes version that will help guide you through the interesting parts, that way you can watch it on fast forward and not miss any of this cinematic masterpiece.

Tagline: They’ll get you in the end.

Jonathon and his girlfriend/wife move into a mansion he inherits not knowing that the mansion was used to house a satanic cult and the botched ritual involving a baby that happened 25 years earlier. Jonathon soon finds books about the occult throughout the house and takes an interest going as far as holding his own seance.  This spewing of incantations, brings forth little demons, or Ghoulies, that must obey their new master Jonathon. Unbeknownst to Jonathon, his dabbling into the cult has also awoken the mansion’s former leader from the grave who returns to complete the ritual from years ago.

“If you do not drink, you will burn. The choice is yours.”

“Wow man, that chick is really a screamer.”

As I mentioned before, this movie was firmly embedded into my childhood memories. However, I don’t remember and can’t believe that my mother would ever let me watch a movie like this growing up. I’m sure if I did see it, I would have thought it was awesome, what with the creatures and the killings, etc. Watching it again some 20+ years later, I have come to realize that this movie sucks just as bad as most everyone else did and that only a 10 year old would like it. However, I did get a couple of chuckles here and there.

Because of those childhood memories this movie brings, I am going to forgive it a bit for being so shlocky. With that said, I am giving this movie 3 turds out of 5.

After a long week of work, is anyone interested in watching a movie that centers on a haunted office building with flying tools and some

god awful editing shots? Well, lucky for you, I watched it so that you can spend your weekend playing catch the window washer with the family.

Tagline: In a city that never sleeps… this building is a nightmare.

Ambitious, workaholic, business woman, and architect, Carolyn Page, spends many hours in her soon to be completed skyscraper of her own design in Barcelona. When strange events begin to happen, such as the mysterious death of a window washer and the unexplained demise of a security guard (unexplained is not a stretch either), she begins to wonder what is causing the mysterious events. To the rescue comes a detective who has a sixth sense who thinks that a ghost may be the culprit.

“Once is happenstance, twice is coincidence, three times is enemy action.”

“Finding eternal rest and all that bulls**t. If you ask me, that’ll be too good for the pr**k”

This movie is nothing special to say the least. Despite the casting of Michael Moriarty, even his “acting chops” could not save this dismal film. It was only 91 minutes, but seemed to drown on for 191 minutes instead. The film was cursed with several bits of very bad editing, even the cool looking monster at the end was not enough to save it. This movie just fails.

I am giving the movie 4 out of 5 turds, some especially smelly ones too.